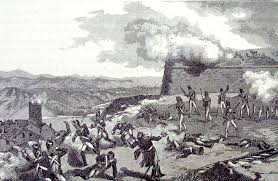 Situated on top of an old volcano, the ancient medieval castle of the viscounts of Cabrera maintained control over the Royal road, half way between Girona and Barcelona. In the 17th century the castle underwent changes to adapt to new times and to the defence strategies of the modern period. For this reason, despite being a fortress, it is now commonly known as Hostalric Castle.

During the Reaper’s War, the modernisation of the village’s fortifications began, and the first works of the campaign were completed, installing earthen berms and fascines that protected the castle and medieval walls.

The first permanent fortification works took place during 1712, as a result of the War of the Spanish Succession. The original design of Hostalric’s modern fortification was done by Francisco de Santa Cruz, a military engineer employed by archduke Carlos. Despite the surrender to Felipe V’s troops in 1731, important renovation works took place during the 18th century, converting this stronghold into the military fortress of the present day. The main works to leave the fortress in a serviceable condition took place between 1794 and 1795, over the course of the War of the Pyrenees.

One of the characteristics of Hostalric’s fortification is that it is built on uneven terrain, and this is reflected in its peculiar shape. The plans and construction systems in fortresses located in easy and flat places were simple and repetitive. However, in Hostalric, the configuration of the terrain, the economical possibilities of the period, the engineering expertise and the skills of the building professionals and master builders created a wide variety of solutions. Its bomb-proof gallery is considered as one of the most spectacular parts of the castle and one of the most unique in the whole of Catalonia.

With notable historical relevance during the Peninsular War, it was one of the last places that the French abandoned in the Spanish state.

It was used as a military fortress until 1929, when it was abandoned and its condition began to deteriorate. During the Civil War, it was used as an ammunition store, and after the war as a refuge and dwelling place for many passing through.

In 1963, the castle and walls were declared National Heritage Site and restoration of one part was initiated in 1967, thanks to private sponsoring, to convert it into a restaurant.

In 2009, the Castle Management Plan was approved and a plan of action was proposed to maintain, conserve and restore the monument. In 2015, the Castle Interpretation Centre was opened, and in 2016, the private concession made 50 years before came to an end, and the restaurant fell into disuse.

During 2018, the Hostalric Castle Strategic Plan was drafted, whose purpose was to define the uses of the castle’s spaces for the next years and convert it into a reference in terms of interpretation of modern-day heritage.